Since Chris and I moved to India, people have been asking me how it is. I have a lot to say, and I find most of it pretty interesting. Everything that I want to talk about is way too much for one blog post, so I’ll attempt to split them up by topic. For this post, I’m just going to dump a bunch of pictures that’ll give you a small snapshot of life here in different aspects. I doubt it’ll be a brief post though, as I start writing this. I can’t help my eagerness to share all this cool stuff I’ve learned while living in a foreign country. I’ve been extremely fortunate and grateful to have this opportunity for such a unique life experience, and also to be able to experience it with the kindness and generosity from Chris’s business partner/our host, Varun, and his family.

Here are some shots of home-cooked food (cooked by house staff/domestic help):

I absolutely love the home-cooked Indian food. It’s so much more mild than all the Indian food I’ve ever had, but I imagine that’s by design — I’m more accustomed to Indian food from restaurants back home, which is always much more rich in flavor, salty and greasy. 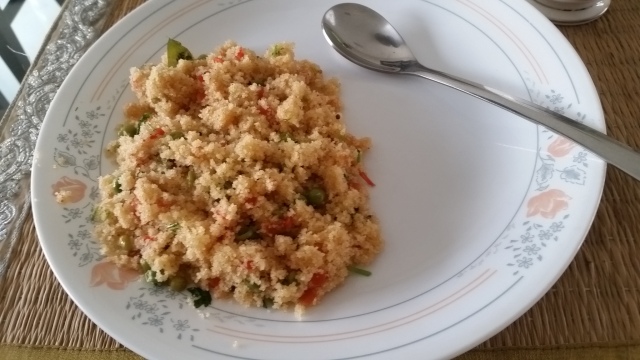 Without getting too much into detail about it in this blog post, you can read a bit about domestic helpers in India here (I picked this article because it’s the main reason why people still hire domestic helpers to begin with). Here’s an excerpt from the article:

The average Indian middle-class household is home to a whole host of helpers, from maids and drivers to nannies, cooks and guards. Some homes even have people that come in just to do the laundry or grill the chapatis.

Indians can afford an army of domestic workers because salaries are so low. A recent survey by one of India’s largest blue-collar job search websites showed just how low.

I haven’t done any laundry, vacuuming/sweeping nor dishes in months — and I don’t have to cook if I really don’t want to, all because we’ve got house staff. I find this to be one of the most shocking things I tell people (mostly from back home in the US) when I tell them about my experience in India.

Here are a few restaurant shots:

I’ve had a few bagels here, and they’re mostly flatter than the ones I’m used to back in the US. 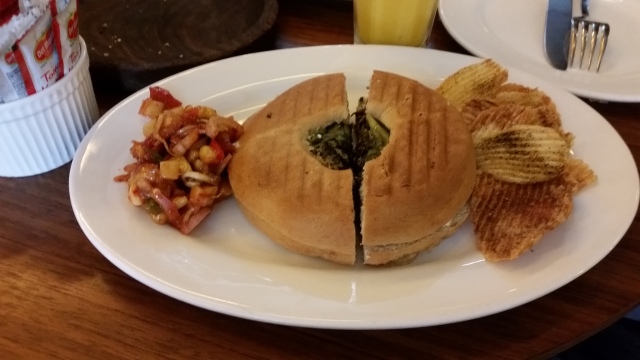 In the USA, since I became vegetarian, I *never* eat anything from McDonald’s. One of my favorite things about India is that there are so many vegetarians — like 1 in 3 Indians are vegetarian, the rest of them are at least part-time vegetarians. There are two different kinds of Maharaja Macs (India’s Big Mac) — the chicken for the non-vegs and the one for the vegetarians:

This loaf of bread pictured below is 46 US cents. You see that green square with a circle in it? That’s the label that tells you the product is vegetarian. If it were brown instead, it means it’s non-vegetarian. I believe this is actually required by law. Even in commercials for restaurants they have these labels, and on some beauty products as well.

Below is a receipt for a restaurant really close to where we live. This meal came out to be less than 10USD. We ended up with plenty of leftovers. I really like the food there. 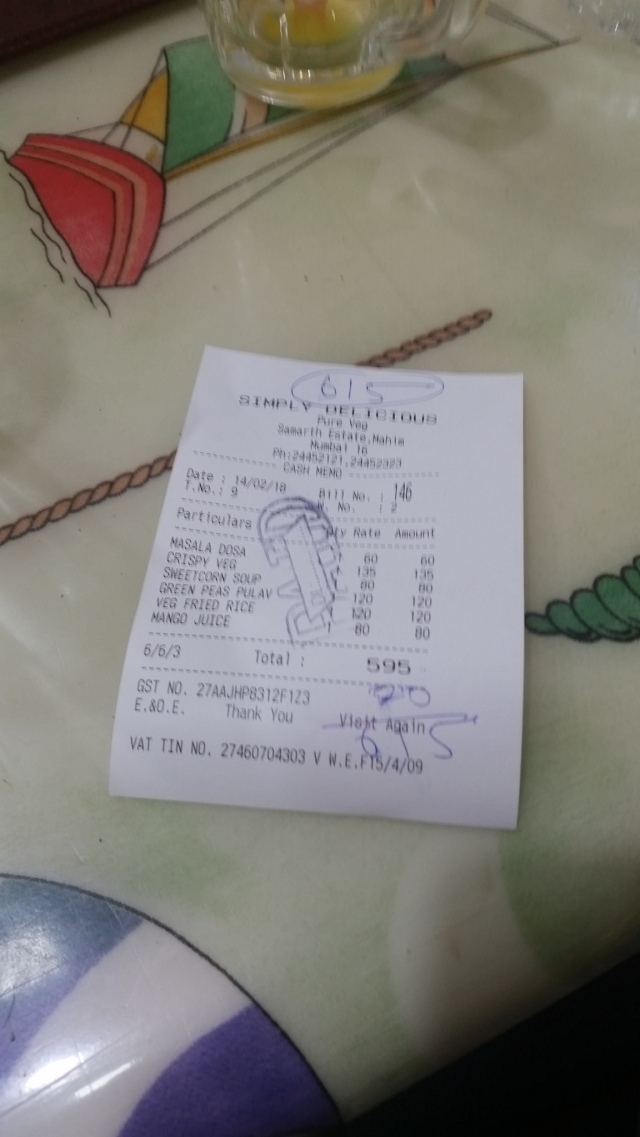 Here are some grocery store pics. Yes, they flavor their cheese slices in flavors such as Green Chutney and Schezwan. I have not worked up the courage to try any of the exotic flavors of cheese slices yet. The plain cheese slices may look kind of like Swiss cheese, but they taste just like the regular American cheese slices — only difference is none of them are that orange color we’re more familiar with.

Here’s some Pringle rip-offs I have yet to try:

Of the following munchy snacks, I think I liked the Peppies the best. Each of these bags are pretty small but they’re only 5 rupees per bag. They’re like onion rings, except instead of onion rings, they’re tomato wheels (or discs, as it’s labeled). 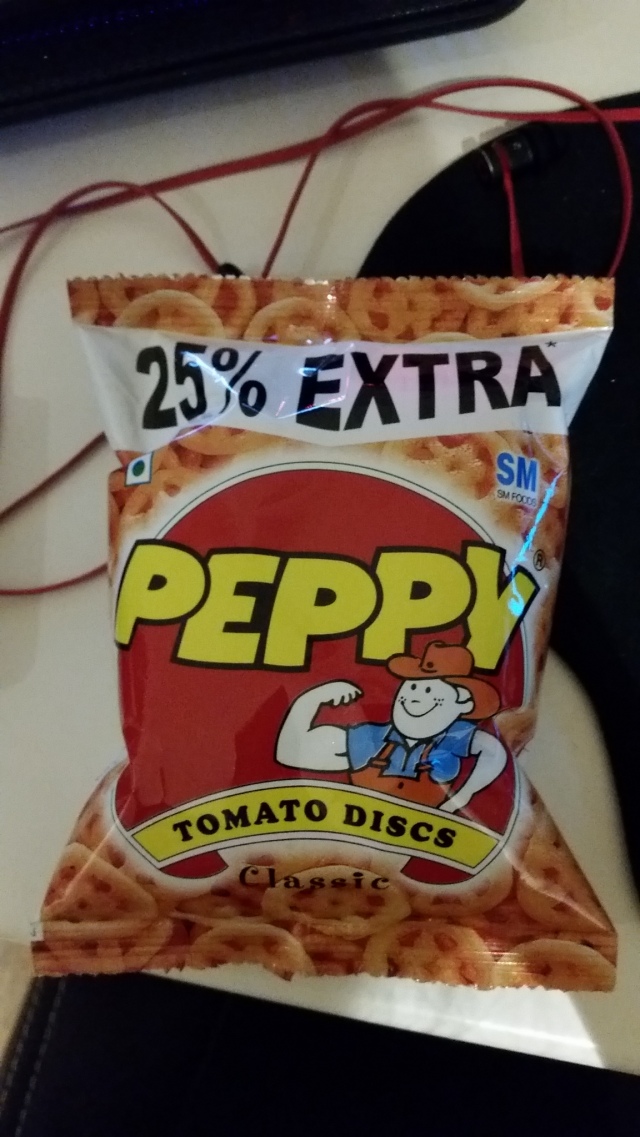 These were too spicy for me, but as I was about to throw them away because I’d left them in the pantry for too long, the butler said “No! It’s not garbage, these are my favorite!” 😛 I suppose I’d also eat my favorite munchies even if they were stale >_>

I tried two different bags of cheese balls in India so far, and one of them wasn’t Cheetos. Both bags of cheese puffs tasted noticeably sweeter than the cheese puffs I’ve had back at home. I also noticed the cream and onion chips were sweeter as well.

Every day, at least where we live in Mumbai, the streets are filled with the cacophony of car horns. Car horns allll day. 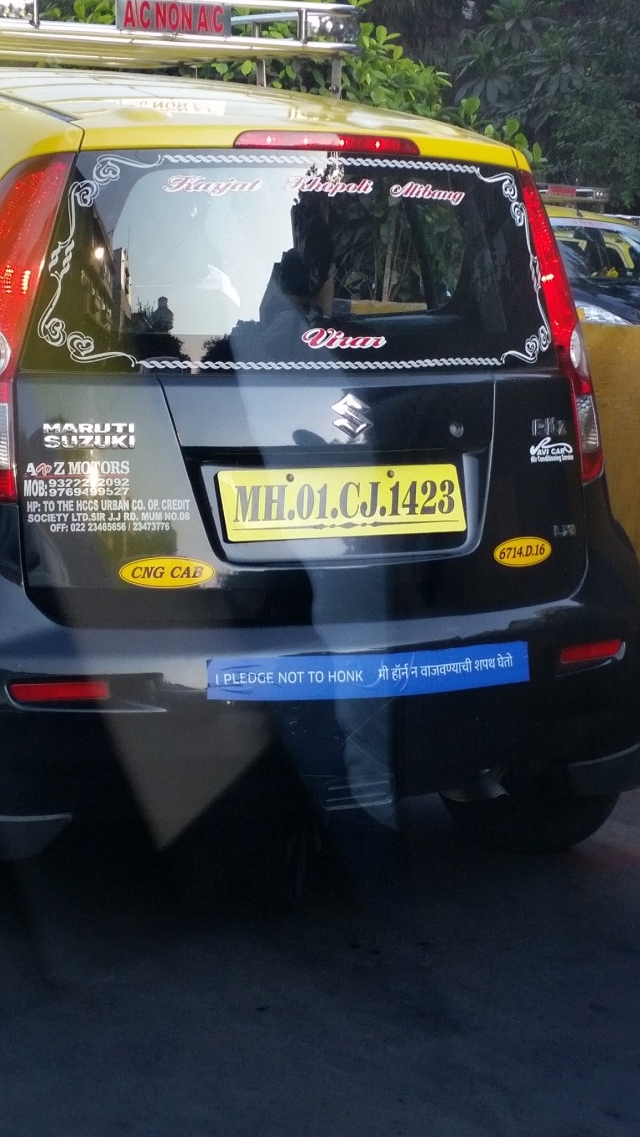 Usually the first thing I mention to people when they ask about India is the traffic. It’s really chaotic, and a free-for-all. Traffic in Manhattan is *organized* compared to what you see in Mumbai. People cut in front of each other very quickly all the time, and the cars often crowd into random blobs rather than organized lanes. Cars miraculously maneuver past each other within inches of collision. Pedestrians cross the street in front of speeding cars all the time. From what I’ve observed first hand, I think Indians are impressively stoic. I’ve been living here for months and have yet to see a traffic collision. Drivers don’t seem to yell and swear at each other when people cut them off like they do in America. But I did actually experience just one time when I was in a car, the driver stopped so short I got really startled. I looked out front and there were two motorcyclists who decided to stop short in the middle of the street in busy traffic and get into a verbal fight for a few minutes.  Other than that, drivers generally don’t get verbal if they get pissed at getting cut off by someone. If they seethe over traffic conditions, they do it pretty quietly — or perhaps that’s only because I and/or someone else is in the car.

You will also see other kinds of safety hazards, like entire families on motorbikes without helmets,  including babies simply being held by their mothers and sitting on their laps — this is fairly common. Now, not everyone is actually being “stupid,” many of them may not have a choice. I’m sure for every family the situation is different. But in other cases, I’ve observed people riding their motorbikes while *holding* their helmets instead of wearing them on their heads. This is not uncommon either.

Don’t the crows of Mumbai look so smart and elegant? 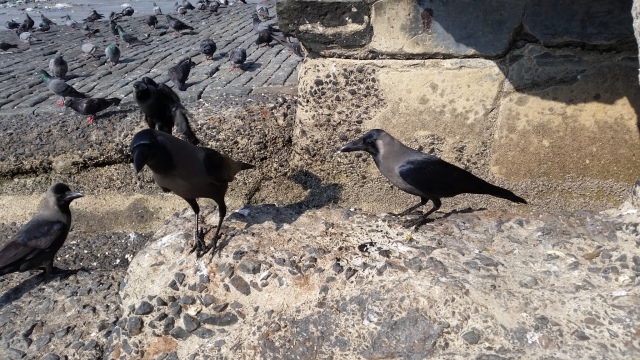 There are lots of stray dogs and cats in the streets. From inside my apartment I do often hear dogs barking and cats yowling loudly, but otherwise when you see or meet them on the streets, they’re very docile.

The pungent odor of the beach is a perfect stormy mix of the salty beach water and sewage, but that doesn’t stop me from wanting to visit whenever I go out to take a walk in the neighborhood. I absolutely love watching the animals on the beach — mostly the birds and the way the crows, pigeons and seagulls interact. When it’s low tide, I love walking further out towards the water. 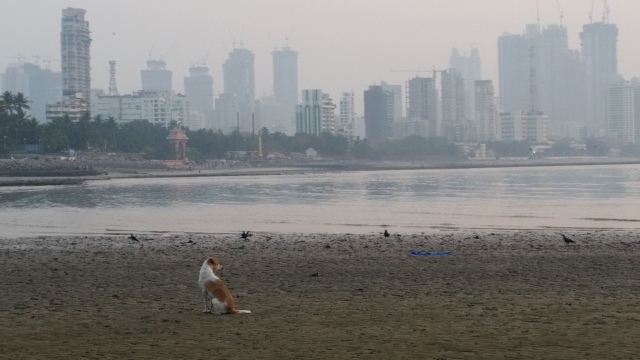 Here’s some cows. It’s illegal to to slaughter them in most of India (hence the chicken Big Mac). 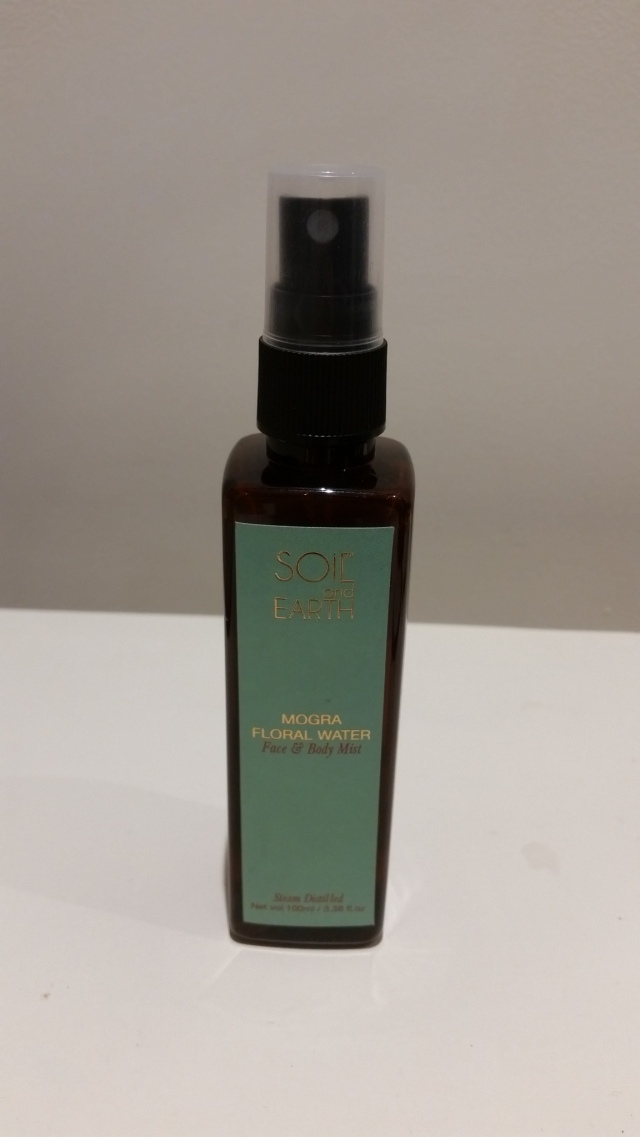 As you can probably tell, I’m extremely obsessed with mogra. The mogra soap costs 25 rupees and as hand soap it lasts more than a month so far. It smells fabulous (exactly like mogra). The aloe vera gel costs 80 rupees, which is 1.23 USD for 150ml. This should be blowing your mind, because if you look for its competitors on Amazon.com (Amazon in the USA), you’ll probably be paying at least 5 bucks. Here are the things I’ve seen this product do for me, in my first-hand experience:

I’m sure there are many other uses for it. Not to mention it smells really nice. Seriously. Patanjali’s aloe very gel makes it so that I don’t have to deal with massive swelling and itching at all between the time I get bitten and when the wound heals up. Even with heavy use, the one bottle lasts more than a month. Let me know if you find a product that beats this at $1.23.

Now… the mogra water probably doesn’t actually do anything except make me really happy because of the way it smells (the one pictured above cost 220 rupees, or $3.39). The smell only lasts a few minutes at most. But I actually tried distilling my own mogra water by buying these mogra flowers from a street vendor for 100 rupees ($1.54, I probably got ripped off as a foreigner 😛 ): 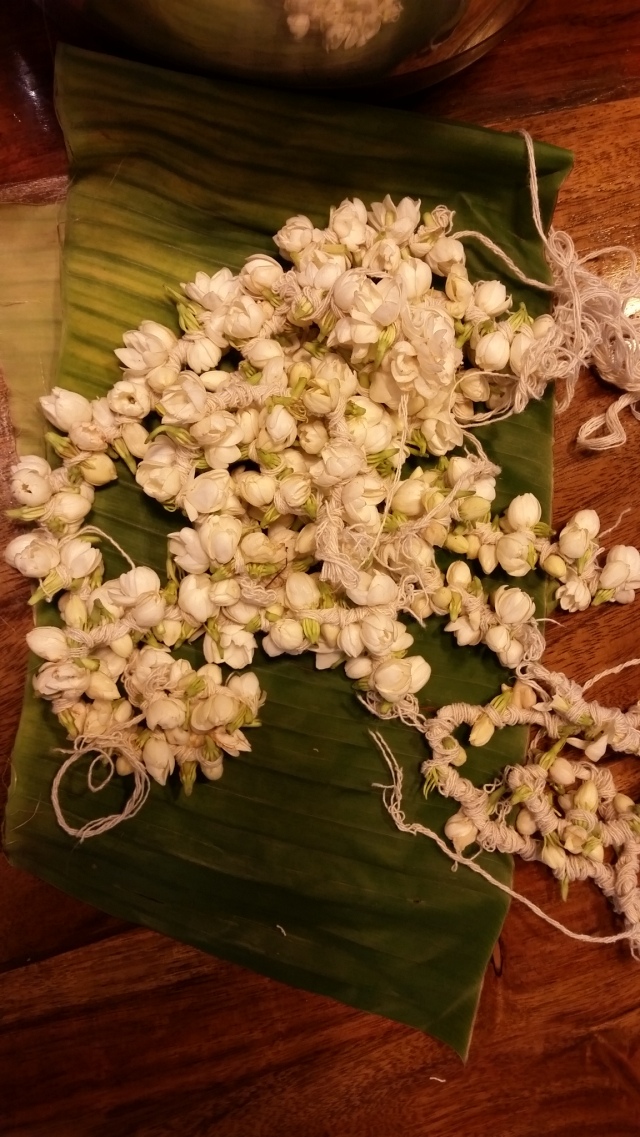 From my experience, it’s hard to make the mogra water yourself and expect the water to smell like mogra. Perhaps I’ll need to try practicing the distillation process a lot more before I can actually make a product as comparable as that of Soil and Earth.

And here are some things I wrote in broken Hindi:

The blue stuff was written by Varun. He helped make corrections to my writing. Hindi script is really pretty to me 🙂

In this shot, there weren’t any corrections yet:

During my first visit to Mumbai last April in 2017, I learned the vowels and the consonants from Varun’s mom. I simply wanted to break down the language barrier and also take advantage of being immersed in a different culture — there is probably no faster way to learn another language. Since my April visit, I learned how to use the accents online. Then I stopped learning for a few months, then got back into it and spent around half an hour a day for a few months just learning Hindi by looking at vocabulary lists and watching Youtube videos. Now I’m taking Hindi lessons on iTalki.

In summary, living in India has been wonderful! I really want to share my experience with you all in future blog posts.

I hope you’ve learned something from and enjoyed this post, thank you for reading! 😀