Here’s a piece I did for my brother’s Youtube channel. I actually have to edit it because the banner can’t be cropped anywhere other than from the center of the image, which I find super annoying. *shrug* But whatever, I’ll just get back into this piece and make some adjustments so we don’t just have the girl’s butt centered 😛

In case you might ask, this is just an image I illustrated that’s meant to look like a screenshot of a real game — but it’s not a real game 😛 I wanted to combine the game genres of RPG and point-and-click adventure games. Perhaps those are my favorite genres? I also tried to play around with an isometric angle, in retro-looking pixel art style.

Here’s an earlier work in progress: 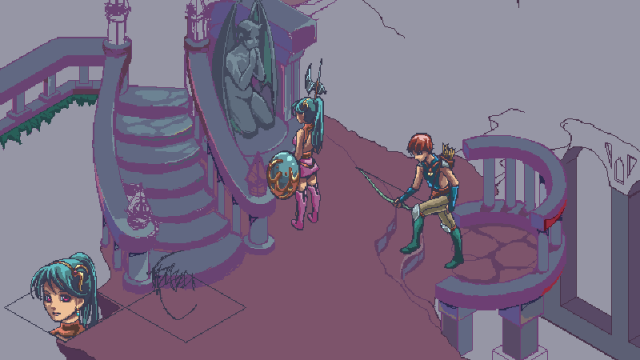 The statue is supposed to be a reference to the statues you may see in the Seiken Densetsu series (Secret/Legend of Mana). The characters I ended up illustrating may resemble other characters already featured in existing video games. Also, I sort of came up with a point-and-click-adventure-esque puzzle just in this shot alone. Given the conundrum the character seems to be in, the items in the inventory and any other clues in the image, what could be a possible solution? It may also be a bit easter egg-ish if you know what those statues do in the Seiken Densetsu series.