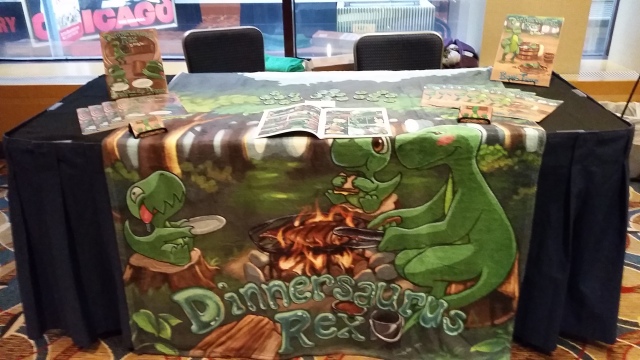 I feel like this crowd was a bit more receptive to Dinnersaurus, though I did have 3 days of tabling instead of 2 or 1 like at the last 2 cons I went to. There weren’t nearly as many little kids, and the age groups seemed to be more somewhere in the middle, mostly between middle schoolers to college students.

I discovered from one of the artists’ tables another method of going about plush dolls. I could just do 2D prints of the dinosaurs, cut out their silhouettes, sew another piece of fabric to the back of them in the shape of their silhouettes and stuff them. For now this seems like a much more viable option. I definitely think the Dinnersaurus table needs something soft and cuddly! 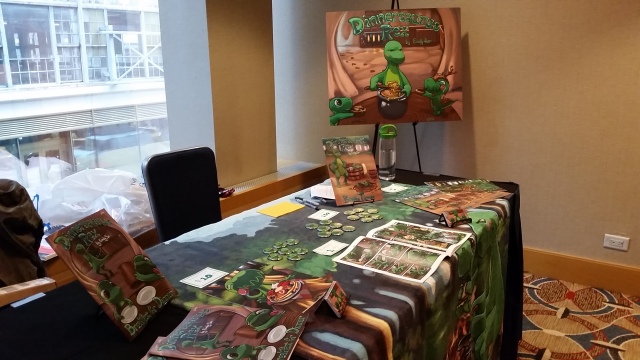 People also asked about the video game, wondering if they could buy it in the app store. Some day we will! But for now it is mostly a crowd magnet for our table during conventions. It’s so funny how people get so offended when Baby Dino throws out the steaks they try to feed him and then give up trying 😛 Don’t take it personally, he’s just a baby dino and you can always try again and again!

In case you haven’t seen the game or forgot, here’s an old video of it that I’ve posted in the past:

I had people play it on my Cintiq Companion 2 at the con, on the touch screen. Probably easier and quicker than touch pad or mouse.

As for what I think is the most important thing for Dinnersaurus in general — the books themselves! Aaahhh! I definitely need to put in at least some hours every single week into these pages and work towards finishing the second book. Now I’m giving myself a deadline: MoCCA Fest. I hope I can get a table there, and people have been recommending that convention to me and it does certainly look like Dinnersaurus would fit in much better there, and the artists’ work there look really cool!
Deadlines tend to make me push myself harder. Some day perhaps we’ll see Baby Dino finally get a bath?

Thank you all for your continued support of Dinnersaurus Rex!