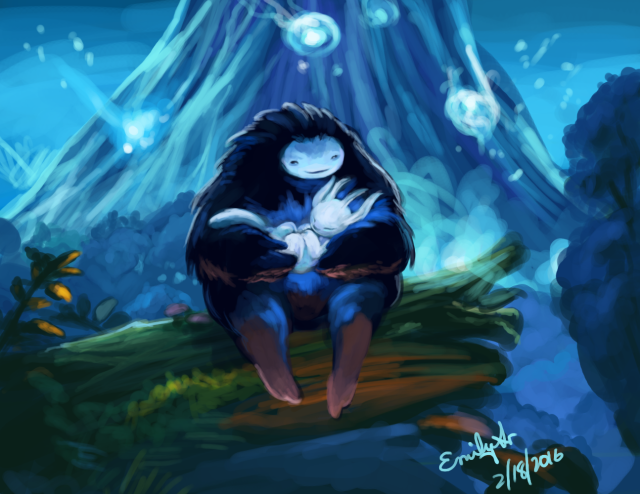 This started out as a demo painting for one of my drawing/illustration students. Then after class I decided to put a little more work into it as a speed doodle.

Ori and the Blind Forest is such a great game. It combines a bunch of the gameplay elements of the first Prince of Persia on the PS3 (the one with Elika), but without the cheese, and it’s pretty much an homage to the Rayman games on the PS3 (Origins, Legends). Great graphics, really beautiful music. The music I have to make a huge deal out of because most of the time these days music is treated as an after-thought, I feel. But this soundtrack is so beautiful, I listen to some of the songs on like endless loops.

The gameplay very smoothly builds on itself, easing itself into higher difficulty and has a real wit to its problem-solving moments. People have complained about the “boss levels” where you constantly die because you didn’t jump far enough or time your movements to the millisecond, but if you have patience and persistence, you can beat the game. But that is seriously the ONLY complaint about this game.

I’m grateful to my older bro for buying me this game.

This game made me cry and I tried so very hard not to.

Get on Steam and play this game.